The French Girl by Lexie Elliott 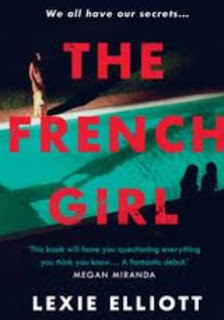 “We all have our secrets…

They were six university students from Oxford–friends and sometimes more than friends–spending an idyllic week together in a French farmhouse. It was supposed to be the perfect summer getaway…until they met Severine, the girl next door. “

I thought this was a good mystery – lots of people to suspect of killing 19 year old Severine. From the blurb above you’d think the story line was in present day France. Not so.

Ten years after the college get-together Severine’s body has been found in the bottom of a well. The last people to see the young woman alive are the six vacationing friends so they are once again drawn into the investigation. Everyone’s lives have changed so much in 10 years. Some relationships have fractured while others have deepened into a loyal friendship. There are some flashbacks but it’s basically lots of talking, remembering and suspicion about which one of the six killed Severine.

Tom, Seb, and Theo are good friends. It’s Theo’s father’s French country home where they gather and meet the mademoiselle next door. Kate was in a relationship with Seb, Lara is Kate’s best friend and Caro (Caroline) is friends with Theo, Tom and Seb. So, which of the six killed the French girl? Much is revealed about the characters and their relationships, fights, and basically lots of motive to go around.

“I stare at Tom as Lara reseats herself and chatters on. He glances at me, but there’s nothing to read in his face. It was so smoothly done; I would never have guessed he was capable of such casual duplicity – once again he is the other Tom, but not Tom. I wonder, is anyone not who I thought? Maybe nobody ever really knows anyone.”

Not too much food mentioned in this book:

“The conversation warms and expands again, slowly regaining volume after a moment of solemnity. More wine is called for and I eat chocolate profiteroles that I don’t really like because by now I’m drunk and will eat practically anything.”

I’m all in for the vodka tonic and could do with a curry meal too but I plan to make that later this weekend.

Lexie Elliott grew up in Scotland, at the foot of the Highlands. She graduated from Oxford University, where she obtained a doctorate in theoretical physics. A keen sportswoman, she works in fund management in London, where she lives with her husband and two sons.