Faithful Place is the first novel I’ve read by author Tana French. Loved it….found out later it was the third of her novels and she wrote about the main character, Detective Frank Mackey, in the previous books. Oh well…..no problem as far as I have read since these are stand alone novels so …I didn’t jump ahead. 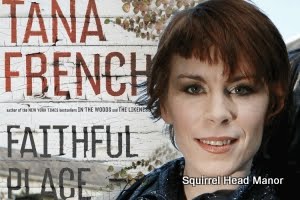 Faithful Place begins with a snapshot of Frank at nineteen. He is standing in Dublin on a cold December night waiting for his girlfriend Rosie Daly. They plan to elope to London and have a good life together, away from the misery of their neighborhood in Faithful Place . Frank is from a working class family but sadly, his father never held a job long and drank away much of what he earned. Rosie’s father worked at Guinness and earned a good living – he hated the Mackey family and was not going to have his daughter mixing with that clan. So, the kids planned to start fresh in England.

Rosie never showed up but Frank kept his vigil, hope fading but he waited until dawn. He went into #16 (a notorious hangout for kids) and found a note from Rosie, stating she was sorry but was leaving and would come back one day. He assumed the note was for him and he was dumped, that she left for England without him. She is the one with the ferry tickets.

Twenty-two years pass. In the start of the next chapter you read Frank is an undercover detective for Dublin police, divorced and gets weekend visits with his much loved daughter. Suddenly he gets a call from his sister telling him Rosie’s packed suitcase has been found stuffed behind a fireplace in #16. Frank returns, after 22 years, and sees his family for the first time since he left. The sisters are welcoming, the youngest brother still idolizes Frank and the oldest brother makes it known he is not very welcome. After looking through the suitcase he meets with Rosie’s family and gets permission to start up an investigation. It would be a cold case so he knew it would be filed and not seriously looked at…..but he has connections and gets the Murder Squad down to look into things.

After that, the first two chapters, you have a very suspenseful mystery mixed with a detailed passionate story of family emotions, personal stories and intrigue. Frank’s voice is the story teller here and I can not wait to read more about him…but evidently from the viewpoint of his earlier years…since I read book 3 first.

“The Liberties,” the first person narrator explains about the district in which Faithful Place is located, “grew on their own . . . .and the Place is a cramped cul-de-sac tucked away in the middle like a wrong turn in a maze.” It is a place that has its own rules—the rules that create character: “no matter how skint you are, if you go to the pub then you stand your round. . . ; you leave the heroin to them down in the flats; even if you’re an anarchist punk rocker this month, you go to Mass on Sunday; and no matter what, you never, ever squeal on anyone.” It is a world where there is no more important motivation than saving face. And for most people born into it, it is a dead end.

There are several big twists and unexpected events which I don’t want to reveal here (in case anyone reads this) and I was quite surprised. That is so nice to read a book and not peg who-dunint and how at the start.

at July 30, 2020 No comments:
Email ThisBlogThis!Share to TwitterShare to FacebookShare to Pinterest
Labels: Ireland, Tana French

In the Woods by Tana French

Going to the bookstores on weekends provides me with ideas for books I want to read. Years back I saw Faithful Place, Tana French’s third book in her Dublin Murder Squad series. If a title and jacket description grabs me I usually check on the author’s other publications. For some reason I didn’t – it was enough for me that the story took place in Ireland and it was also a mystery. Love both.

Recently I finished In The Woods, French’s first book. The book starts with the story of three children who disappear in the woods one afternoon. Jamie, Adam and Peter are very tight friends and have always been so for the twelve years they have lived in the neighborhood. One day they go off playing and don’t come back. Parents start a search, the garda is called in and they eventually find Adam Ryan clinging to a tree, blood in his shoes and slash marks across his back. Jamie and Peter were never found. Detectives talk to Adam but he was so traumatized by what happened that he can’t recall anything.

Fast forward 22 years and we are introduced to Rob Ryan, a detective with the Dublin Murder Squad. Rob is actually Adam Robert Ryan, the boy who was terrorized in the woods many years ago. He goes by his middle name so there is no association of the case where his friends went missing many years ago. He and his partner Cassie Maddox are assigned to investigate the murder of a twelve year old Katy Devlin. Katy’s body is found near the same woods where Rob’s friends had disappeared. Katy is discovered during an archaeological dig. Could this be related to the previous crime?

Rob and Cassie continue on with the investigation even though they know Rob should come clean with the supervisors about his true identity. It’s a gritty story, a good mystery. Rob is obviously scarred by his childhood experience. He’s overall a likeable character but has some serious flaws when dealing with relationships, particularly those with women.

I had read some reviews and noted there are a few people who were very disappointed that the first mystery remains unsolved. I was rather hoping you would have some closure on what happened to Rob/Adam and his friends Jamie and Peter. It’s still my hope that French will one day come back to Rob Ryan’s story and give us some closure on the disappearing kids. I will tell you the murder of Katy Devlin is solved despite some real groaners of frustration near the end. Overall I loved this book and as I have already read book 3 in this series, I guess I will tackle book 2 next.

More about the author