The Turn of the Key by Ruth Ware 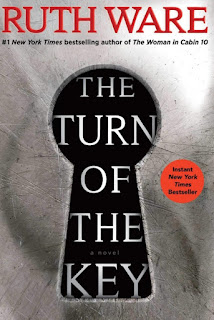 This is a difficult book to review.  There are so many twists  in the plot in spite of it being a slow burn of a read.  It does start off slowly, in my opinion, but you will be rewarded with the surprise ending.

The story unfolds in the form of Rowan Caine's letters to an attorney.  She is basically begging him to help her as she is in prison for the murder of a child and she says she is innocent.  In order for her story to make sense to the attorney she must set the scene and describe how she got the job and what went on the isolated Scottish home.  It's Rowan's point of view throughout until the end.

Rowan answers an advertisement for a full time nanny.  The position comes with an amazingly generous salary and all sorts of perks.  As the home is located in an isolated part of Scotland and four previous nannys have resigned after a short period, the employer wants to be assured of a commitment for at least one year.  The rumors of the "smart house" being haunted is addressed and as Rowan doesn't believe in ghosts she accepts the position. However, there is another reason why Rowan wants this position, which will be revealed later, which changes how you view things. (Cryptic, I know, but I can't give a spoiler)

The smart house was a character of it's own with it's extensively built-in technology. The shower was programmed for former nannys in regard to spray and temperature.  The program called Happy could respond to voice commands such as stating close the curtains or turn off a light.  There were cameras everywhere and that alone was creepy.

The employers are a husband and wife team who are out of town frequently, demonstrating and designing the high tech build-ins for homes.  This means the nanny will be left for some length of time with the couple's four children.  This happens almost immeditatly and we see Rowan isn't the perfect nanny she presented herself as durng the interview. There are many secrets about Rowan;  near the 80% part of the book just about all is revealed.

Revelations about Rowan, the children, the hired man Jack and Mr. Elincot.  Oh, the secrets explode and make so much sense....you will think back to why such and such happened.  The Ah moments.

The ending was a surprise and I have gone back and reread the last 3 chapters.  Lots of questions about what I think may have happened.  It would be a spoiler to discuss here so you would just have to judge for yourself.

Once Upon a Wardrobe by Patti Callahan

This story will be enjoyed by those who loved C.S. Lewis' books about Narnia and The Lion, The Witch and the Wardrobe.  As someone who... 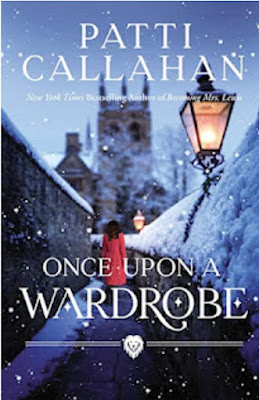