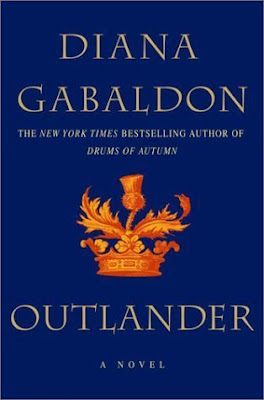 Anyone who has been a fan of the Outlander book series by Diana Gabaldon knows her next book is about to be published!  Go Tell the Bees That I am Gone is book nine in the series.  I am not certain if that is the last book to wrap up this saga but I am anxious to read it and continue the journey.

That made me want to revisit the first book - Outlander - which started it all.

Outlander has many of the features I love to read about – time travel, a bit of romance, it’s a historical fiction, genealogy, Scotland and lots of dialogue! I read this the first time after picking up a copy from the used book section at my local library. I was hooked! In the beginning you are getting to know Claire and Frank Randall. Frank is obsessive about his genealogy and they are in Scotland checking out the area where his ancestor, Black Jack Randall, went to battle in 1745 at Culloden.

Claire was a combat nurse, separated from Frank by war and her duties. She is reunited with her husband and they went on a second honeymoon in Scotland, getting reacquainted with each other again after a long separation. During one of their outings they visit a dolman. Something special in one of the rocks at a dolman they visited attracts Claire and, upon touching the stone, she is transported back in time – same place, but 200 years earlier. Naturally she thinks she’s landed herself in a BBC production of some costume drama when she sees the Red-coated British uniforms and Scots in full kilt and sporran get up running from them.

Meeting Frank’s ancestor, Jonathan Wolverton Randall, is shocking (for obvious reasons) but to see him as the spitting image of her husband (Frank) is quite unnerving – especially since he isn’t kind and compassionate like Frank. She is saved from certain rape and interrogation by Capt. Randall by a Scot named Murtagh. He takes Claire to a cottage where she meets Jamie Fraser for the first time. The seven or so Scottish rebels are as puzzled by Claire as she is by them. They think she’s a spy for the English. Randall thinks she’s a spy for the Scots or France. Viewed by all with suspicion makes it difficult for her to escape. Claire ends up marrying Jamie so she may become a Scottish citizen and thus, untouchable by the English and protected. Still – even with her attraction to Jamie, she plans to try and get back to her own time.

There are so many interwoven story lines within this book with all the characters; I hung on to each chapter and was left hooked on these Outlander books. Happily for me, there were 4 more in print when I first started reading it so I quickly moved on to the other stories. I am awaiting the last book of this series to come out for what is promised to be a tear jerker finale.

I've only seen a few episodes of the television series and it didn't rock my world so I can only speak about the books.

Sharing with Joy's Book Blog for British Isles Friday and Marg at The Intrepid Reader for the 2021 Historical Fiction Reading Challenge.