His and Hers by Alice Feeney 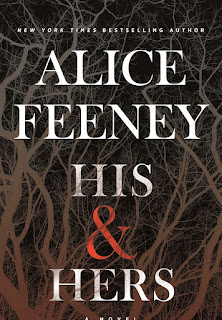 When a woman is murdered in the small British village of Blackdown newsreader Anna Andrews is reluctant to cover the case.  Anna is originally from Blackdown and has bad memories from her school days and early marriage. She is currently in London and aspires to be the main newsreader on televsion.

Local detective Jack Harper is called to the murder scene and there are involvements on his side as well as Anna's with the murder victim. Jack becomes a suspect in this investigation but he knows Anna has secrets about the case as well. It's a Russian nest doll of revelations as each layer is revealed.  The connections will keep you guessing about motive and who is the main suspect as the bodies pile up.

The title His and Hers refers to the perspective which the story is told.  You will go back and forth between Jack and Anna's point of view.

This was quite a page turner.  Guaranteed you'll be surprised by the end and the murderer's identity.  I enjoyed this book so much that I put every novel by Alice Feeney on hold at the library.