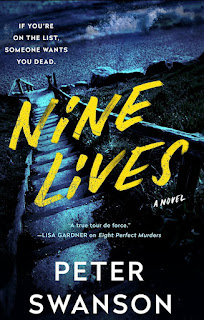 "If you're on the list someone wants you dead."

The beginning of the book starts with a cast of characters and a small biographical introduction.

Matthew Beaumont - a suburban father stressed by the complexities of family life in Dartford, Massachusettes.

Caroline Geddes - an English professor at University of Michigan, lives in Ann Arbor with two cats.

Each person receives a letter without a return address and a simple list of nine names, their name included.  The individuals seem to have nothing in common.  They mostly live in different geographical parts of the country from Massachusetts, California, Michigan, Texas, Maine, Connecticut and New York City.  They don't know one another.

One of the characters is Jessica Winslow.  She is a FBI agent and her name is also on this list. Obviously the FBI does a search to see if the names are connected in any way from arrests, previous cases or relationships.  There isn't a connection yet one by one the people on this list are killed.  Some have police protection yet the killer finds a way.  The final few chapters reveal the slim thread of connections and I certainly had not figured it all out.  That's always fun if you're a frequent reader of mysteries and the ending is a surprise.

I would defintely read more by this author.

at May 25, 2022
Email ThisBlogThis!Share to TwitterShare to FacebookShare to Pinterest
Labels: Nine Lives, Peter Swanson