The Dilemma by B. A. Paris 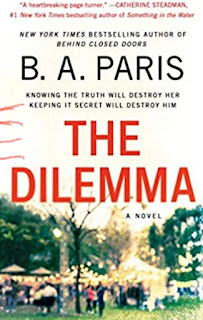 This book could have  been 200 pages shorter. In my opinion, the entire sequence of events could’ve been summed up in a short story and you would not have been left wanting more. It's important to state the IMO straight away as I am definitely in the minority on this.  I see many 4 and 5 star reviews but I am going with a solid 2 and a half.

Livia  and Adam are a couple married  for 20+ years. Livia  seems like a self-absorbed woman with loads of low self esteem. She’s been planning her 40th birthday party ever since she felt robbed of a big wedding back when she became pregnant with her son. Her parents did not approve of having a child out of wedlock and cut her out of their lives. The big wedding her mother promised her suddenly disappeared and so she planned, back when she was newly married, to have her “ big day” on her 40th. That's a long time to nurse a grudge because she felt slighted by her parents.

The other storyline woven in concerns Livia and Adam's daughter Marnie. She is studying in Hong Kong. Unbeknownst to Livia she is secretly flying home to London so she can be at her mothers 40th birthday party.

Adam knows his daughter is flying back and what flight she will be on and so, when he hears about a deadly crash on a flight she was supposed to be on, he is obviously concerned. But does he tell his wife? Oh noooo. He doesn’t want to ruin her party. No seriously. A birthday party with 100 people, catered and costing who knows how much money.  Adam has to be sure Marnie was actually on the flight because if she was, she did not survive.

The title Dilemma refers to Adam and Livia keeping a secret from one another.  After the party they each plan to tell the other the secrets they are holding.  For Adam, it's Marnie is missing and presumed dead. Livia's secret also involves her daughter but it's about an affair and more involving Marnie and someone they know. They don't talk to each other!  That's the big thing here.  Each one going over their worries alone and planning when to share with each other. Bah...

This author had been getting good reviews for her book Behind Closed Doors so I thought I would start with this one when the library got it in. Perhaps I will try Paris' other novel but I won't be rushing to the bookstore to grab it.

Sharing with Joy's Book Blog for British Isles Friday as the setting is England and B.A. Paris is a British author. This is  a book about friendships, forgiveness with a glimpse of the suffragette movement during the WW I time period.  There seem to be m... 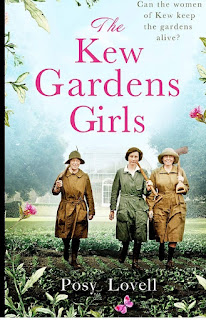